When we first began this blog, we wanted to discuss the things that we see that could, and most likely will, transform healthcare.  We are a healthcare technology company, and while technology is part of our DNA, it’s not all of it.  The other part of our DNA deals with facilities, systems, processes, and consumerization issues in healthcare.

Those consumerization issues relate to patient/consumer control of their own health data; at the very least, to see and share that collective information with other caregivers.  We carry that philosophy literally in the name of our product and our brand – PWeR®.  We also see consumerization driven by access to information, quality comparison of care, and price transparency by putting the consumer in control of their health and the cost of their care.

Looking back, the transformation of healthcare has been slow.  However, through the years it has been picking up materially, and we expect it to relatively go parabolic over the next few years.  Changes are underway, with the core change being the internet and all the points the internet has changed.  The ability for people to search, see, and share data in progressively smarter, faster and smaller devices.  From the late 90s, that vision of the future has changed everything.  We will admit that from the vision of 1998 to the reality of 2018 – those 20 years have developed slower than we anticipated.  However, when you look at it now, it appears those changes began almost immediately; the upward trend was clearly there as a technology S-Curve.

The technology-driven transformation curve in healthcare over the last five years has clearly accelerated and that acceleration is driven by two master trends: technology in general, and the power that consumerization of information has caused.  We may be biased, but we see it everywhere.

Over the last three years of this blog, we have highlighted this repeatedly, and the trend has accelerated, especially in the last 48 months.  To substantiate this, look at the graph on “digital health startup funding” for the last eight years.  We think this is only the beginning. 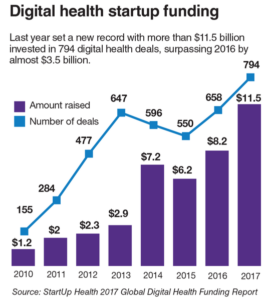 Well, if you read our previous two blogs, we noted the cost of healthcare is going to effectively go up by 66% over the next decade.  We think those numbers are likely to be too low, and in particular, the growth relative to U.S. Gross Domestic Product.

One of the most interesting, and even harder to project developments, are the proposed vertical mergers in healthcare – the announced mergers of CVS/Aetna and Cigna/Express Script.  As with the blown-up proposed mergers of Aetna/Humana and Cigna/Anthem, I am not very optimistic for these mergers either.  I could go into more detail however, suffice it to say, if either or both manage to merge, they will be disappointed, and will likely regret it in a few years.  There is always the stand-by “Amazon will buy them” idea.  That can always happen.

I could argue why it would make sense for Amazon to do so.  The core issue is the complexity of dealing with patients on the insurance side, and it will distract Amazon more than anyone can imagine today.  You must have been in the insurance, managed care, clinic management and patient care business to understand why I am so pessimistic on that idea.

A few days ago, we started reading news that Walmart and Humana could be in merger talks. That could be a change agent in a lot of ways.

Since early 1980s, I have been impressed with Walmart’s use of technology to control their entire supply chain from manufacturing to consumers.

In 1998, I signed a deal with Humana, who I have a long-standing history with, that eventually was worth hundreds of millions of dollars (USD).  The company that I conceived and founded led to Humana’s acquisition after my departure for a reported $800 million (USD).  Therefore, I think my knowledge of Humana is not superficial.

I will discuss in our next blog the reason why a potential Walmart/Humana hook-up is different from anything we have seen so far.

Just remember what I wrote above:  What we see as the technology-driven transformation curve in healthcare over the last five years has clearly accelerated and that acceleration is driven by the two master trends: technology in general, and the power that consumerization of information has caused.