With the U.S. facing yet another recession of unspecified depth and duration, widespread economic issues, some exacerbated by the Russia-Ukraine conflict, we have an abundance of economic news. These reports are showing a precarious situation for the U.S. economy.  For the very first time in decades, the healthcare sector accounts for a solid 20% of the U.S. economy, and it may be showing some signs of lagging in healthcare cost relative to inflation.

We have a few points to discuss.  First, let’s start with one that is so historic it has not happened in “half a century.” Yes, you read that correctly. The news comes from my best monthly source of healthcare economics- that is Altarum[1]. The entire headline reads, “Inflation-Adjusted Health Care Spending is Falling for the First Time in Half a Century.” They also published this graph, that surprised me. 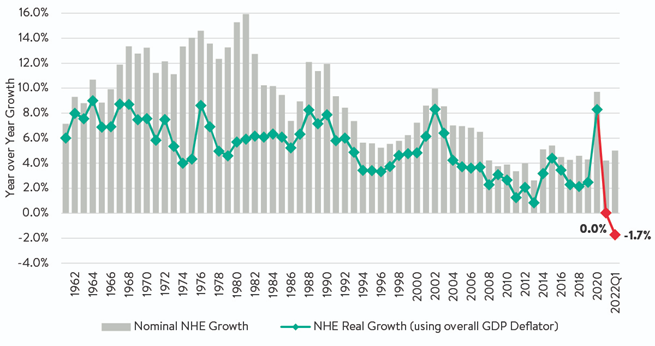 Over a period of 50 years, the National Healthcare Expenditures (NHE) has always been a positive compared to both Gross Domestic Product (GDP) and inflation; however, they’re showing signs of reversing that trend. We can also use the term “inflation adjusted” healthcare spending. The net adjustment was a negative 7% (-7%) – no small amount for a sector representing 20% of GDP!

This decline is driven by the rapid growth of inflation in the U.S., and though at first this may sound like good news, and we are beginning to reduce cost of healthcare, it actually is not. The reason may surprise you. Healthcare utilization rates continually rise and fall based on things like a flu season or a ‘pandemic’ as we witnessed during the COVID period. We also know that in general people, are living a lot longer, and the moderately stable growth in Medicare numbers from older Americans is a result of Baby-Boomers hitting the age 65 at a rate of 10,000 per day. This assures that healthcare gross numbers will grow by %5 to 7% years for a decade.

What is slower moving, even lagging in the reporting by twelve (12) to eighteen (18) months, are the healthcare reimbursements by government programs like Medicare and Medicaid and private insurances of all kinds. The U.S. Government sets rates for every medical procedure Medicare or Medicaid covers and adjusts every year. Those adjustment can be higher or lower for individual procedures or a bundle of procedures. That means, the cost of providing medical care ranging from individual doctors to hospitals are adjusted yearly, or in many cases, every two years. We have yet to see any material adjustments in these contract rates, or their corresponding cost adjustments to medical insurance for employers or government programs.

In short, much like floodwater building up at a dam, I believe there will be large increases in medical cost adjustments over the next three (3) years.  Sadly, it is looking more like adjustments of the late 70s and early 2000s. It would not surprise me to see healthcare insurance cost increases of 7% to 10% for 2023, and correspondingly high single digits for 2024 and 2025.

Just a few days ago, The U.S. Center for Medicare and Medicaid (CMS), the agency that sets rates for these U.S. government programs, started the trend with their release of their proposed 2023 Medicare Physician Fee Schedule Rule[2].

We think this is just the beginning of the price increases that will accelerate, as with the U.S. inflation rate is remaining at or above 9% nationwide. Labor shortages, and escalating labor and hard costs, will drive doctors to consolidate to get more efficient; a trend we have seen before. They will also be forced to use more technology to (hopefully) drive greater efficiency. Managed Care Organizations will also look to reduce cost and complexity.  We think that will be great for remote patient care (RPM) where technology really hasn’t had a noticeable impact to date (apart from a telemedicine to a small degree), because most seniors prefer face-to-face with their physician (‘personal touch medicine’), and they’re much less interested in a video or audio encounter.

As we’ve stated many times before, we strongly believe that healthcare medical practices will continue to consolidate, integrate, and accelerate the use of technology so that the lines between care and technology are blurred – what we fundamentally believe to be “technology infused care” ™.  As we reported recently on the Amazon acquisition of One Medical, this trendline has just started.