On Friday, July 8, 2022, some big news was headlined on CNBC.com[1], “Payrolls increased 372,000 in June, more than expected, as jobs market defies recession fears.” The fascinating part of this is not just the growth in employment, but also how different it was from the other months that “leisure + hospitality” had the biggest gains.  This time, it was back to the standard that “healthcare + social assistance” lead the growth, though growth in the “Professional” category and in “Leisure + hospitality” were not far behind. Economists usually say that all “recessions” are triggered differently and look different.  Due to the demographics, this one will clearly look different.  In part, there are more than 1.8 jobs for every 1 that is looking for a job, and we are close however, not yet to the levels of total employment pre-pandemic, though we have added millions to the workforce. 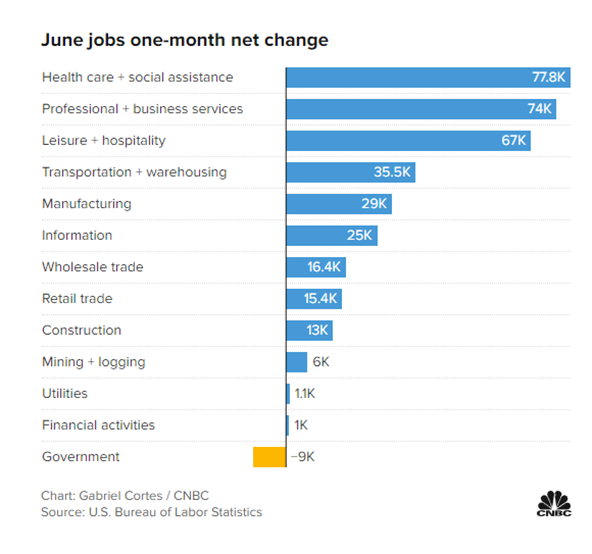 In Part 2 of last week’s blog, we ended the discussion noting that healthcare has been the second best (as shown in a graphic representation of the Standard and Poor’s 500 index stocks categorized by sectors and industries).

We also opened the window to Wall Street last week, and today, we will look at two leading Wall Street bank’s view on healthcare, as well as one international bank on the global recession risk. First, we’ll discuss the later in this case.  Nomura Securities, a firm based in Tokyo, Japan, who says “major economies are headed into recession in the next 12 months; “In addition to the U.S, Nomura expects recessions in the euro area, the U.K., Japan, South Korea, Australia and Canada next year,” the brokerage firm said in a research note. [2]” They further added, “The U.S. will fall into recession — so negative quarter-on-quarter GDP growth starting in Q4 this year. It is going to be a shallow recession but a long one. We have it lasting for five quarters in a row.”

Our suspicion is that they are delayed in their assumptions as we believe that we are in a recession now, and we’re just on the edge in the U.S. If we are up less than 1%, we would still be down for the first six (6) months of 2022, and it looks like there is little that will improve for the third quarter of 2022. So, much more likely, we are in a full recession this year, and if there is no Black Swan, 2023 should be a recovery year.

In a world of ever larger storm clouds, the continuing good news is for healthcare. Recently, Bank of America Securities Global Research released a report that was a “Sector Focus Point” on healthcare. The title of the report was “Health Care deep dive: 9 reasons it’s our favorite overweight”. The report went on to list those nine (9) reasons, some of those points were telling, such as – “most upbeat outlook”, “Mergers and Acquisitions”, “Demand.” They noted aging demographics, and “alpha without beta” noting that healthcare was idiosyncratic, story specific and a boon during periods of macro uncertainty. Our favorite would have been the 10th point however, they did not make it that way, and just said, “Want tech with less hair? Buy Health Care.”

As I have noted in Part 1, my original purpose to get into healthcare was economics however, as fate would have it, it has become my own personal passion for many decades. How do we make it better? Many people dabble in things, but I jump in with both feet. While securing over 40 licensed patents and patents pending, I’ve been in the middle of delivery of care running primary care companies.  Additionally, I’ve been on the services side owning and operating laboratories and imaging centers, and most recently, building multiple healthcare technology applications. These experiences have convinced me that healthcare is the number one industry in America driven by the heavy retirement states like my own here in Florida. Despite being the number one industry, healthcare has not hit its peak, or apex, which may be a decade away. This makes healthcare an incredibly stable and resilient industry to not only work in, but also invest in.

In Part 4, we will talk about healthcare spending in 2021, and the trends for the first six (6) months of 2022.  We’ll also dive into more reports from banks and healthcare futurists who are finally “getting healthcare!”